The ‘Rotary in action’ jigsaw puzzle from Rotary Club Winschoten #RCWinschoten is a great success. “It’s our best promotion ever,” says #FreerkPotze of Rotary Winschoten proudly. “We are almost sold out, except for a few puzzles that can still be ordered through our site. Thanks to all the puzzlers, we raised 60,000 euros for the Rotary initiative #EndPlasticSoup. That’s what we do it for. Everyone is puzzling for a clean sea!”

In addition to the many orders from our own country The Netherlands, orders came from Australia, the USA, Spain, Switzerland and Turkey. “And after an article was published in the German Rotary magazine, orders and enthusiastic responses from our eastern neighbors in #Germany also poured in.”New Puzzle

Rotary Winschoten responded to the puzzle craze during the Corona crisis last year. A bull’s eye, it now appears. Potze: “More than 5,000 puzzles have been sold and are still in high demand. That is why we are continuing it. “The draftsman is already working on a new puzzle. This time not with fifty running Santa Clauses, but with all kinds of activities around the international Rotary ‘Summer Camps’. “It will be a real summer puzzle, which we will launch nationally and internationally at the end of May. Once again, the proceeds will go to EndPlasticSoup, because that fits with the international theme of Rotary worldwide: #ProtectingtheEnvironment.”

The proceeds from the “Christmas puzzle” are intended for the Rotary EndPlasticSoup Foundation. They support and realize projects that prevent and reduce plastic pollution in our nature. An example of this is the Bubble Barrier; a bubble screen that uses air bubbles to stop and capture plastic in the rivers before it flows into the North Sea. Every year, more than eight billion kilos of plastic waste disappear into the seas and oceans worldwide.

GertJanvanDommelen, co-founder of EndPlasticSoup, is impressed by the outcome of the puzzle campaign. “Really a super action that Rotary Winschoten has set up; making and selling a fantastic puzzle that has occupied many people recently. It was really a tough puzzle. And what an incredibly beautiful yield for EndPlasticSoup. This brings us another step closer to our ambition: a world without plastic waste by 2050. Part of the proceeds will go to the investment in a new challenging puzzle. We expect it to be a success again. The remaining, vast majority of the proceeds will go to education and monitoring, and of course to the Limes #BubbleBarrier project in Katwijk. We are very happy with it, thanks to everyone! “ 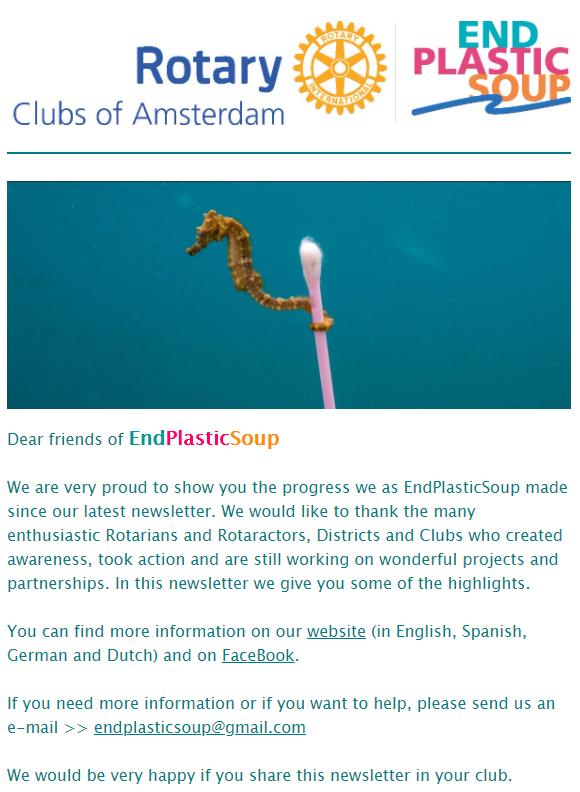